The Truth of War 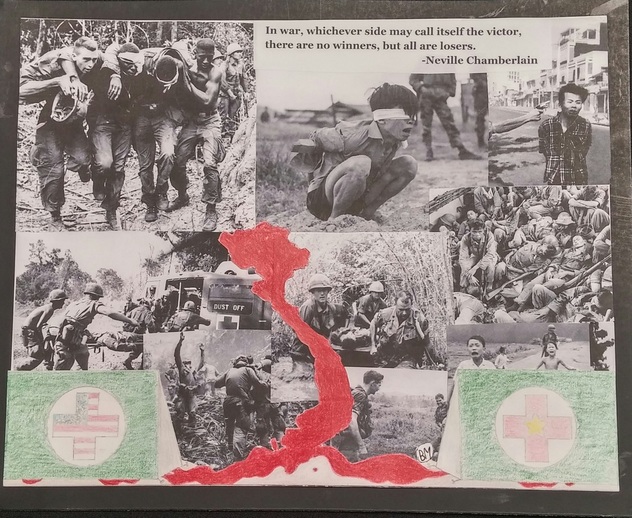 No Winners
Collage and Pencil on Cardstock

For my art piece, I tried to express that there are no winners in war. The collage part of the piece shows real life examples of the hardship and pain created by the Vietnam war. I chose to include real images of the war because there is so much power in some of those pictures and I think they really solidify the point of the piece. I chose to include the quote that I did because it is a really compelling quote that really does express the truth I was trying to show in my art piece. The bottom portion of the paper is mostly dedicated to the drawing I did. I drew two army medical tents, one belonging to the U.S. and the other to North Vietnam, which I showed through having their flags in the crosses. These tents represent the casualties suffered by both sides in the war, which is further demonstrated by the blood coming out the of the tents. The blood seeps out from the bottom of the tents, and the pools come together to form the shape of Vietnam. I think that through the drawing of war tents, the Vietnam created by blood, the quote depicting a truth of war, and the collage of pictures from the war, that the truth that war really has no winners is expressed.

For our Vietnam War project, one of the things we did was interview veterans of the war. My group consisted of Corry, Maya, Hannah, and myself and we interviewed a gentleman named Calixto Cabrera. I thought the interview was extremely powerful and I’m glad that I had that experience. I found it very exciting to have him as our guest and to host the interview. I thought that as a group we all did extremely well with being courteous and kind but also professional. I think if I would change one thing it would be to use higher quality audio recording equipment; I thought that the interview was very strong and important and if the audio quality was better then the interview would have truly been of the highest quality. I think one thing I gained from the interview was more respect for veterans. I also think I got a better idea of what the vietnam war was like for the people participating. Overall I think the interview went extremely well and it was an experience that I will remember for a long time.

After finishing all the chapters we were supposed to read in The Things They Carried, we had a socratic seminar in class. I think the seminar went pretty well; everyone did a great job of not only following the seminar norms, but also with their participation and the ideas that they shared. I am satisfied with how I did, but not necessarily impressed. I feel that I did a good job with following the seminar norms, but I wish I would have shared more. I thought I did a good job in the ‘Communication & Clarification’ category of the seminar rubric because of the traits I demonstrated and the contributions I made to the discussion. I think if I focused more on the ‘Perspective’ category of the rubric rather than the ‘Communication & Clarification’ category then the seminar would have been more constructive for me, and I would have contributed even more to the group discussion. I think that the main point that O’Brien makes about the what is true in war and what isn’t is that whether the details of something are completely true or not, as long as it does communicate or represent something about war that is correct, then it is true. In his book, O’Brien talks a lot about what makes a story true or not, and he even admits that a lot of the stories in the book are made up. Despite this, he still considers it a true war story because a lot of it does communicate truths or ideas of things that did actually happen.

​​I learned a lot from this project about both the history and reasoning of the Vietnam War and about war itself. From all the learning we did about the history of the Vietnam War, I feel that I found out a lot about how wars can be started and why. I think my majority of learning about war itself was from the book we read, The Things They Carried. I really enjoyed the book and I feel that I gained a lot of knowledge about the truth behind war.  I learned that war isn't one thing, it can be anything. It is disorganized and cruel. It is scary and unforgiving. War knows no bounds and makes everyone different afterwards. I learned a lot from this project and can't wait to take the next step in the project of making an art piece.