​Part 1: New Insights
For me, this project really helped to clearly define my own personal philosophy. Before the project, I had a loose understanding of my beliefs, but I was able to eventually solidify them and be clear and confident in my convictions. One of the most beneficial tools that gave me new insights was all of the reading we did through the course of the project. The books, more so than the shorter readings we were assigned, each gave me a new perspective, idea, or mentality that I could use when pondering my own philosophy. Reading The Stranger by Albert Camus helped me to learn a lot more about existentialism and nihilism, and how I personally feel about the idea of the absurd. Reading A Tale for the Time Being by Ruth Ozeki caused me to think about the concept of time continually ticking by, the possible connection between all living things as taught by Buddhism, and if each life really has its own purpose. Finally, reading Into the Wild by Jon Krakauer gave me perspective and ponderance of human’s relationship to the environment, what true happiness is, and the differences between solitude and human interaction. Both the books we read and the essay I wrote contributed greatly to me solidifying my own personal philosophy.

Is happiness connected to success and vice versa, or do each have to be pursued separately?

Is the reality and inevitability of death something that people struggle with their entire life, or do we eventually come to terms with it?

Will my personal philosophy on life, happiness, and meaning ever prevent me from doing something or lead to a less fulfilling life?

View the written piece at this link

Paragraph 1: Project Description
For this project, we first spent a lot of time learning about the historical context behind Japanese internment. We started by learning about the phenomenon of balancing liberty and security during times of war. Then we learned about the attack on Pearl Harbor and what relations between the U.S. and Japan were like during the early 1940s. We finally learned all about the decision to intern and what internment camps were like for Japanese Americans. We did this through a lot of readings that covered many different perspectives and we even watched a film about a Japanese man standing trial for murder called Snow Falling on Cedars. After learning about the history and details of Japanese internment, we started to dive into the legal side of things. We learned about the general legal concepts that applied to the case and about the specifics of Korematsu vs. US. The class split up into teams for what would eventually shape our mock trial; lawyers and witnesses for the prosecution, lawyers and witnesses for the defense, and judges to act as the supreme court justices. After about two weeks of working with our teams, crafting arguments, finding evidence, and planning strategies for the case, we finally had our mock trial. Taking place in the La Plata County Courthouse, we were watched by an audience of at least 50 middle and high school students. The trial went fairly smoothly, with only a couple unscripted moments, and eventually the court ruled in favor of the defense, my side.

Paragraphs 2 & 3: Which Team Won?
Each team in the trial, both the prosecution representing Korematsu and the defense representing the U.S. Government, used very specific arguments in efforts to sway the justices to rule in favor of their side. The prosecution alleged that Japanese internment, specifically in regards to Executive Order 9066 and the subsequent Civilian Exclusion Orders, violated the 8th Amendment (cruel and unusual punishment) and the 14th Amendment (equal protection clause), and was therefore an infringement on the civil liberties and individual rights of Japanese Americans and an unconstitutional law. The prosecution had witnesses testify that the Japanese aliens who were suspected of espionage and sabotage had already been captured and interned, that there was not a significant threat among Japanese Americans, and that internment was subjecting the Japanese to discrimination and poor living conditions. The defense argued that the reason behind internment, and why it was ultimately an acceptable and constitutional action, was out of military necessity, with the goal to protect the West Coast from the potential threats of espionage, sabotage, and collusion. The defense had witnesses testify on intelligence that was collected that served as red flags among the Japanese, the decisions made by high ranking military officials based on the evidence and how they felt it was a military necessity at the time, and that the conditions of internment were not cruel and unusual and were based on the greater good for Americans. Each side made their arguments quite clear, especially in their closing statements, but which one was the rightful winner of the case?

When it comes to deciding which side won the case, there are multiple ways to look at it and make a decision accordingly. First, there is the distinction of time period. The original case of Korematsu vs. US took place in 1944, a very different time compared to 2017 wherein something like internment taking place is not even fathomable. The next way to look at the case is based on the differentiation between the facts of the case and how it was argued. Based on the facts of internment, I believe that any court should have ruled in favor of the prosecution; the United States Constitution is built on a belief in individual rights, something that, based on the facts, was clearly violated by excluding and interning an entire group based solely on the basis of their ethnicity, whether the country was at war or not. However, if the winner is to be decided based on how well of a job each side argued their case, then the winner should be the defense. I believe that our side did a better job of being clear and articulate on what our argument was, especially in the direct examination and closing statement, and that our team did a much more effective job in cross examination, especially when it came to making the witness testimony less credible and effective. In summary, I believe that the original court in 1944 should have ruled in favor of the prosecution because I believe that Japanese exclusion was unconstitutional, but when it comes to the mock trial, I believe the judges should rule in favor of the defense because I believe we did a better job of arguing our case.

Paragraph 4: Reflecting on the Process
I actually really liked this project, namely because it covered two topics that I am fairly interested in; history and law. I got the chance to learn a lot more about the topic of Japanese internment during World War II and I got a way better understanding of how legal cases work, how arguments are crafted and presented, etc. I really enjoyed those parts, but there were also some things that I disliked and/or felt that could have been better. Working with a team was frustrating at times, with people not always pulling their weight, a team member leaving the group for the entire project, and what could sometimes be unclear communication, it was hard for me to marshal the group into creating a cohesive and complete legal argument. When it came to the trial itself, I thought that one of the worst problems was a lack of preparedness for courtroom etiquette, structure, and flow by both lawyers and judges, and an extreme unfamiliarity with the characters and questions by the witnesses which resulted in a generally awkward and seemingly forced trial. I really enjoyed the project overall, but I think some of the practices related to the trial itself could have ran a lot smoother.

The Morality and Politics of Justice

Research Question: Should the government raise the federal minimum wage? 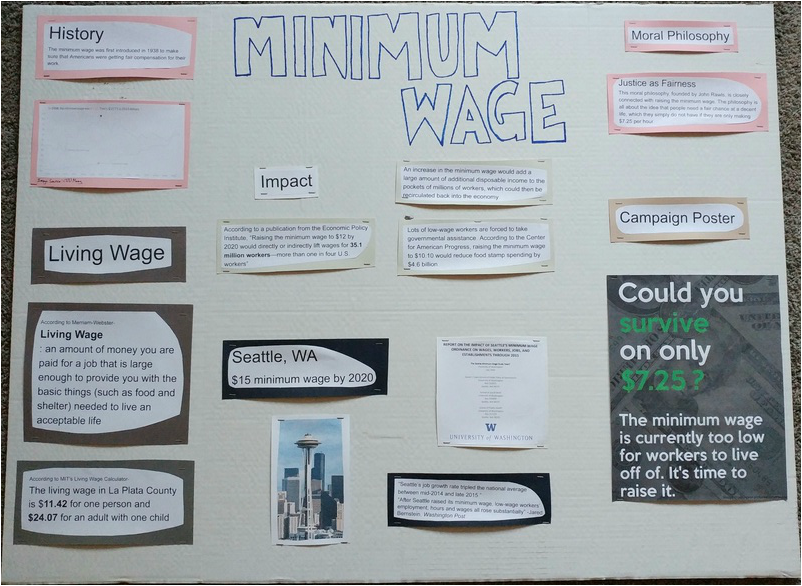 My project, a poster board with all the factors that led to me forming my stance on the issue, including a campaign poster.

This project was all about how people make decisions and how theories and philosophies pertaining to morality and justice influence our political opinions. We spent a lot of time as a class reading the book “Justice” by Michael Sandel. The book delved into a multitude of theories about justice but as a class we focused on utilitarianism, libertarianism, deontology and justice as fairness. These philosophies serve as the building blocks for how people come to decisions about political issues, and so that is what each student did. Each student picked their own political issue, created a yes or no inquiry question, and then did their project around it. We had to write three papers: one about our personal perspective and connection to the issue, one that was on the pro/yes side of the issue, and one that was on the con/no side of it. After writing about and representing the arguments for both sides of the issue, students took their final stances and created a product that communicated that stance. This product, as well as the initial writing pieces, were then exhibited to parents and the public at a local coffee shop.

​Over the course of writing my papers arguing for each side of my issue, I made a significant amount of changes to many aspects of both of them. Other than the standard proofreading that occurs when editing a paper, I made a lot of additions and retractions to the content that I included. One thing that I really struggled with was in my careful thinking, I really struggled to incorporate a moral philosophy into my arguments. Through my revisions I was able to connect each side to one of the moral philosophies we learned about which added content that was much more relevant to the things we were learning about in this project. Thanks largely to peer critique, the mechanics of my papers were greatly enhanced. I got lots of feedback and suggestions that improved the structure, style, and quality of my sentences and, more importantly, how I organized my paper to create the most effective essay. Through critique and revisions I was able to greatly improve the quality of my writing products for this project.

Now that you have looked at both sides more deeply, how and why has your perspective shifted?

I think that researching both sides of this project really gave me a good idea of why both sides believe what they believe and what kinds of things they value. The side in favor of raising the minimum wage really believes that people are not able to survive making so little and so it is our duty as a society to help make sure that even those being paid the smallest amount possible are still being paid enough to get by on. Conversely, the side in favor in keeping the minimum wage does not believe it is the most rational decision as it could be. Raising the minimum wage could potentially hurt businesses and employment, doing the opposite of what proponents are hoping for. It is hard to know how it really would play out nationwide, but doing the research on both sides really allowed me to see why one would favor raising the minimum wage out of a moral desire to help or oppose raising the wage out of a reasonable fear and doubt.

Is there a middle ground or room for compromise based on your understanding of the perspectives on the pro and con side?